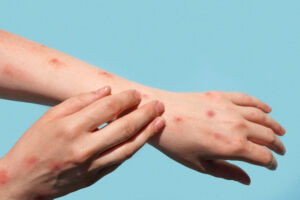 Monkeypox is a virus that is native to Africa and cases have recently appeared in America due to the travel of a person diagnosed with monkeypox, or coming into contact with an infected person. Monkeypox symptoms typically begin with a fever and are followed by other nondescript prodromes such as general unwell feeling, muscle aches, and headache with a typical development period of 1 to 2 weeks.

What are the symptoms of monkeypox?

After the onset of the sickness (around 3 days), a rash will appear. Almost every case of monkeypox develops fever before the rash. Many times sores develop on the face before they spread anywhere else, there has been one case that started in the groin as opposed to the face. The sores follow a progression pattern throughout the illness, macules, papules, vesicles, and pustules and then they scab over and fall off. The visual appearance of the rash has a similar look to smallpox, with a centrifugal distribution with sores on the bottom of your feet and palms. Monkeypox can also occur while you are experiencing other illnesses. A range of 1% to 10% of monkeypox cases sees fatality.

How do you transmit monkeypox?

A confirmation from labwork of monkeypox is done through a PCR test on the sore. A case is considered contagious 5 days before the rash breakout and is contagious until the scabs fall off and a new layer of skin has formed. Person-to-person spreading of the infection happens mainly through droplets in the air, meaning that separation, masks, and distance can help stop the spread. The droplets in the air can only travel a few feet. It is also possible to contract monkeypox is also possible by the transmission of bodily fluids or sore particles. Animal to human transmission is also possible from breaking the skin, as well as direct bodily fluid contact. Although there is not one specific treatment for monkeypox, the same treatment options for smallpox can possibly be helpful. 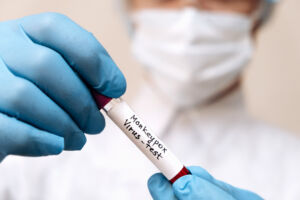